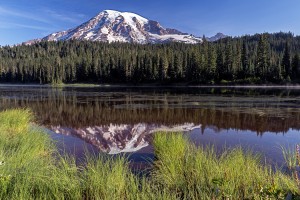 I’ve worn glasses all my life, and last month mine needed to be sent back to the manufacturer to be repaired. At my age seeing anything close up without help is, well, nearly impossible. After all I read and write for a living. So out came an old pair (that I had to dig through boxes to find). Wearing them for a week, it turned out, provided clarity for my life, in spite of my blurry vision.

It’s no secret that I’ve experienced a series of life-changing events. With the exception of my marriage, every other part of my life has been turned upside down in these last five years. What was important to me before . . . in my career, my climbing-up-the-ladder days . . . was gone in an instant. My security, my confidence, my peace of mind were all based on my job and what it enabled me to do.

As I moved through the last few years of turmoil, I judged my now by my past. When I put those old glasses on, it became blatantly clear to me that they didn’t work very well anymore . . . and, likewise, looking at my current life through the lens of my past doesn’t either.

What I thought or did before may have brought me to this point, but it is what I choose to see right now that enables me to be happy, now. And now is all that matters.   Because now is when I can make a difference.

Cheryl Maloney is a resilient lady. In addition to her vision, sense of humor, and dedication to create a safe space for people who need it, her resilience and vulnerability consistently keep her close to her followers.

I met Cheryl at an exciting time in both of our lives. We were both hitting a stride, when the power of possibility shined brightly after most of the dust of various transitions had settled. I consider her one of my diamond finds along the journey to my own actualization.

As the New Year 2014 was fast approaching, and Cheryl’s following was growing in leaps and bounds, my gut told me that everyone newly welcomed to the Simple Steps Real Change Community needed to know that vital little bit more about the journey of our esteemed and well- loved founder and publisher. Though her natural modesty initially shied away from a personal interview, I am privileged to share her story with even more people who might take heart from it.

Unsurprisingly, when I sat down with Cheryl to hear the arc of her story, she never disappoints. Having gone through a three year period akin to A Year of Magical Thinking, she boldly created a mission that has contributed solace, inspiration, community and infinite possibility to nearly half a million individuals all around the world.

That’s no small feat in today’s smorgasbord of self-help gurus. But Cheryl will be the first to tell you that she’s no guru, and has little need for them. She’ll tell you instead that it’s time to honor the guru within ourselves. We all have the answers, all the time. Sometimes we just need a little help and wisdom getting the clarity to see what’s been there all the time.

Like many of us, Cheryl found herself in a seemingly unmanageable place in time. She felt confounded and mired in a terrible situation that was mercilessly taxing and soul-challenging. She discovered that the big, classic spiritual and self-help tomes become burdensome instead of helpful. Cheryl’s quest for a simpler answer is a reward for each of us.

YOU’RE SITTING IN TEXAS, YOUR BASIC SECURITY NEEDS ARE AT RISK … DID THE COMMERCIAL INSPIRE YOU TO SIT DOWN AND START A BLOG?

The blog started before that … shortly after we moved to Texas. I was 53 years old, in a state I had never lived in, and I couldn’t find another job. I was just writing to express what I was going through. I’d never ever written anything other than work documents before.

I was blogging on a website at the time that no longer exists, and pretty much no one was finding it. It wasn’t until my niece suggested that I put this on Facebook that things took off. Even though I stopped just lying on the couch, I found myself looking at what I had lost in my life. And I asked myself,“Is this all there is left to your life?” My family all live into their 90s, and I thought, “Is this how I want to be for another possible 40 years?” So I started reading everything I could get my hands on. I was reading so much, but I could not ingest anything. Everything felt so complex! Finally, I came upon Happy for No Reason by Marci Shimoff. It was all about how to find Happiness again, and how people looked at things differently.

Then it struck me: It’s just got to be simple. There has to be more! And it has to be real. So one day I just strung those things together.

Once I moved to Facebook as SSRC, things steadily crept along. [Laughing] I was literally sitting in a doctor’s office waiting room when my 57th person signed up! I was so excited! It hit me that people are reading what I had to write. It crawled along for months and months, and finally there were 1000 people! 7000 people!

WAS SSRC BECOMING CENTRAL TO YOUR WAY OF LIFE?

First of all, Jack was doing everything he could to be understanding. He has the patience of a saint. In my darkest moments, he never once said anything like “You have to go back to work.” It was, “Do what you want to do, it’ll be ok. We’ll figure it out. Don’t worry about it.” No-problem- Jack. He was supportive and understanding, and he’s always been that way. We’ll figure it out. We’ll get through it.

And yes, all of my free time was spent writing. It was never about just Train of Thought. It had to be meaningful, so it would tell a story. I committed to blogging daily. It was so important to me that I make a personal connection with everyone on the forum. I sent a message to people on Facebook when my dad was in the ambulance. Some of our readers will remember how I even wrote, “My father is going to die tonight,” and the love and support came back to me! There were so many people out there who’d been through this. All of a sudden, we were talking about praying for help – not religiously, but spiritually. As new readers were coming in, we were doing the same thing. SSRC was becoming a place people could be supported and safe. People needed to feel safe! It’s been an amazing journey.

WHO WERE SOME OF THOSE FIRST PEOPLE WITH WHOM YOU INTERACTED?

They were regular, everyday people. They were folks who were trying to put food on the table, whose children had died, people whose kids blamed them for the divorce. That’s the connection that’s most important. Everyone is going through something, but we forget about that with the everyday stresses. Most people seem to just be told, “Get over it, and move on.” But people need to be supported. As long as they feel they are alone, they feel like pariahs. The truth is that millions of people are feeling the same things, and you have to allow yourself to feel what you feel. Then you can get past it. You deserve more.

My biggest impact came from a lady in Chicago. Around the time the market crashed, she lost her job, was caring for her mother, and needed to feel safe and secure. I had put a post up on a Saturday morning that said, “If it’s important enough to you, you will find a way.” She exploded! “How dare you say this, you have no idea what it’s like!” And she unloaded on me.

I stepped back and realized that I had a choice. I could say “Get over it,” like everyone else, or I could take a different position. So I responded: “There’s nothing here to negate what you’re going through. When you’re ready to get to that point of living your dream, you WILL find a way.” We ended up talking on the phone for over an hour, and we laughed. She changed my perspective that day, adopting this attitude of gentleness and kindness. We’re all going through something. There are degrees and steps. There’s a journey.

WHAT DID YOU DISCOVER DURING THOSE YEARS IN TEXAS?

I had always been a positive person and bounced back in 24 hours if anything happened to me, as far as anyone else was concerned. But internally,

I was completely obsessive: a worrier! I spent so much time worrying about the things that I didn’t want to happen. And every one of them came to pass. I was focused on not having enough money, and that is exactly what happened.

As soon as I stopped doing that, it all went away. I no longer focus on what I don’t have. I focus on the fact that I can pay my bills every month. That may be the Huge Lesson. Real discovery is the willingness to see all the possibilities, and not just what is in front of your face.

WHAT DO YOU MISS ABOUT THE WOMAN IN THE CORNER OFFICE WHO DROVE THE BMW AND THE PORSCHE?

I don’t miss anything … is that true? Yes, I don’t miss that person. I’m grateful that I lost pieces of that person, because that person was arrogant, and that I found who I am really am. It was all a front before. None of that stuff means a hill of beans. Relationships with people matter most to me now. I can’t tell you I miss any of it. I’m even glad I lost it, though I wish it could have come a different way.

WHAT DO YOU SAY TO PEOPLE WHO CLAIM: “PEOPLE CAN’T CHANGE”?

If you believe they can’t, they never will in your eyes! We don’t let people change.

When we go through life-altering challenges, we’re either wiser or waiting for another lesson. There will be another lesson if we didn’t get it the first time.

Right now, SSRC is a safe harbor where people can come and just be, come to feel support and understanding and kindness and love, and not feel pressured, ostracized, condemned – all those negative feelings because people disagree with them. I’ve created a place where everyone’s beliefs are honored. That is what I want Simple Steps to continue to be.

WHAT IS THE GREATEST LESSON YOU’VE LEARNED SO FAR?

It’s that every person is doing the best that they can.

WHAT IS YOUR SECRET TO KEEPING IT SIMPLE?

I truly believe that if we break up what we see as complicated into its smallest parts, we’ll realize there is a simple path right in front of us. And we take that path one simple step at a time.

WHAT’S AT THE END OF THE PATH?