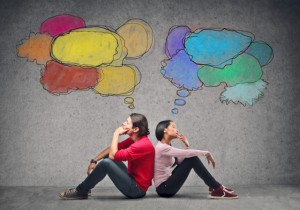 You consider yourself part of the bohemian lifestyle, all things commercialized are a disgrace, and no “real” job should interfere with doing what you love and finding your purpose. He on the other hand, is suit by day and part of the whole mind-numbing rat race. He has the stylish apartment and the BMW; and yet, you met him in the organic food section at the supermarket. You started swamping recipes and realized you enjoy each other. He makes you laugh. You love cooking together or eating at ethnic restaurants, but a lot of things are off limits. You don’t like the same music, same places for weekend get-away’s, and you find his friends shallow. Can you overcome the differences even though you really, really enjoy him as a person?

Or, what if you are an attorney making your way to partner and he is the manager of a taco bell? You met him at a chic new martini bar and he was dressed to kill. You never would have guessed that he comes home smelling like grease every night. He has no ambition to leave or advance. He likes his little world. He definitely has a lot of mental and philosophical similarities, but he is a beer drinking mans-man and you don’t have a lot of similar interests. He gets discouraged when he can’t afford to do things for you or you want to do things that he can’t afford to do. Some things you just can’t relate to, but you love your time with him anyway.

Is this relationship doomed straight from the start, or is there a way to make it work?

I think it really depends on what the differences are and how important it is to you that they be the same. You are hopefully mature and secure enough to know that you don’t have to have the same interests. If he loves NASCAR and Budweiser, you don’t have to share that. Occasionally sacrificing a few hours on a Sunday just to watch part of the race with him is great but other than that, use that time to go to an art gallery or catch up with the girls. Do something you know he’s not totally into that you like. Conversely, do you see him making efforts to partake in the things that you enjoy that he could care less about? This give and take of small compromises is vital in a lasting relationship.

If the differences are of fundamental issues, like work ethic, priorities in life, or values…you would be best to take some time to examine how important they are to you, but chances are this isn’t going to work. Does he have a disgruntled relationship with his family and think it’s totally odd that you actually like to connect with yours regularly? This could be an issue, especially if he acts like a two-year old about your insistence that it is important to you that he attends your nephew’s baptism. Do you need growth and adventure as a regular part of your life? Where as he would rather stay spending his weekend in the lazy boy for the rest of his days? This is a needs and values difference. Don’t sacrifice what you believe, or need, for him. You’ll eventually come to resent it. Don’t try and convert him to your ideals either. You wouldn’t want him to do that to you.

Sometimes being open to the world, lifestyles, and viewpoints outside of our own is really enlightening, and fulfilling. Just because you’ve always gone for the retired college jock type, doesn’t mean your true partner won’t be a sensitive, open mic poet type. Anytime we restrict our options, or keep ourselves in a box we are probably not having the fullest experience we could be.

All this being said, you want to make sure the core beliefs are the same if nothing else. It is important to know that your relationship needs will be met, one way or another, in some form. Just as you shouldn’t restrict yourself in seeing what might be appealing and work, don’t limit your ability to get your needs met.

Sometimes you can have not enough in common. People can be too opposite. Opposites don’t always attract!