Let me be clear: I hated Yoga. I have attended a Yoga class about a half dozen times over the past 15 years, and I hated – absolutely HATED – each and every one of them. The first time I went I hated it, and each time afterwards I went with a friend who asked me to go with them, and I hated it even more.

I would deeply regret being there as soon as the class would start. I was too prideful to simply walk out, so I would stay for the torture and force my body to make as good a showing as I could. No matter what, I would NOT be the one to quit.

From beginning to end, I would be cussing in my head. I kid you not. Every single moment sounded like this, “I can’t believe this sh##, why the fu## am I fu##ing here? This is by far the absolute stupidest thing you’ve ever done, Janet. You know you fu##ing hate this sh##, why the hell did you come, again? Fu## everybody! This is total bullsh##,” and on and on and on. Incessantly.

I hope you now understand that I hated Yoga.

Throughout the years, I have had friends who swear by it. I would share my disdain for it and they would recommend that I just stick with it. I would laugh. “Yeah, right,” I’d tell them.

One of my exercise DVDs has a small section of power Yoga right after the stretches at the start of the video. I would dread doing it, but in my dogged determination to get healthy after having been obese, I would do it. It was only about three minutes of torture, so I endured it. It’s been about one year since I’ve played that particular DVD, so I don’t miss doing that part at all.

Why I attended a Yoga class last week (for the first time in, literally, 10 years) I’ll never know. But, I went. I was shocked to find that it wasn’t that bad. There were a few times when I wanted to walk out because it got quite difficult for me, but I stayed with it.

The complete and total miracle was that I wasn’t cussing in my head the entire time. I think I may have cussed once or twice, but I quickly moved through it. I actually couldn’t believe the slight feeling of exhilaration I felt towards the end of the class. I think I felt like a total badass because I actually got through it, and dripping sweat from head to toe felt pretty good also. I had thoroughly stretched my boundaries (pun intended).

“Who are you, and what have you done with Janet?” I thought, as I checked the Yoga class schedule a few days later. I was tickled that I planned to go back, and when I did, I had a somewhat rocky start, but soon settled into it. I didn’t feel that sense of exhilaration like the first time. I guess as they say, the first high is the best and it’s downhill from there. But, I felt a happy and badass sense of accomplishment nonetheless.

While listening to the instructor’s voice during class, her words hit home: I made the connection of listening to my breath while moving from pose to pose, trying not to strain and keeping my breath nice, relaxed and even.

I started to get the hang of it. Rather than overachieving like in the past, I was gentle about listening to my body and allowing it to do what it could and taking breaks when I needed them. When I noticed that I was listening to my body, it brought me to a new level of understanding about myself. This was certainly an unexpected revelation.

But today, just today – my fifth Yoga class in two weeks – as I was sweating my butt off, I was grateful that the class was winding down. While settling into a pose, I noticed that I have long legs. And I thanked them for being so strong. Never before had I felt or expressed that. I realized I was connecting with my body in a brand new way.

And that’s when my tears began to flow. At that moment I realized how long I have been disconnected from my body. I already knew that I disconnected from it before first grade after I was sexually violated. I had long since already honored what I did to survive. I had already made peace with the fact that I ate for comfort. I had already become my own best friend during my dogged determination to heal myself.

All these years, no matter what I did, no matter how I had abused my body, it was rolling right along with me. Wherever I was in my mind and spirit, whether hurt, perturbed, annoyed or otherwise, my body reflected my state of mind perfectly. Whether I was overeating, overdrinking, over smoking or otherwise ignoring its needs, it changed according to my actions and choices And, it stayed strong and loyal as if it was a loving puppy waiting for some positive attention from its master.

And in that moment, all of my hard work flashed before me. Every single ounce of pain in my life felt like it was worth it for this one moment of revelation, this one moment of awareness, this one moment of clarity. In recent years my level of gratitude had already been through the roof, and today marked a deeper sense of it that was both humbling and profound.

I could actually feel my body releasing the trauma that was in there. I could hear my spirit guides whisper to me, “This is the fulfilled promise from all of your hard work.” The awareness rippled through my body like a pebble piercing the surface of a lake.

In a flash I understood that everything I had done, all of the strides I had made, all of the focus and attention I devoted to my healing journey, led to this moment of inexpressible alignment, consciousness and understanding. There’s no forcing it and there’s no rushing it. Everything happens in its own time.

I imagine that I will continue attending Yoga classes. While I don’t expect to experience fireworks every time, I look forward to shutting down the stimuli of my day and having focused moments of attention aligning with my body, strengthening the bond we established today.

I am so grateful for having been awakened to the sacred connection between me and my body, and wish you the same joy in whatever way it reveals itself to you. That will be the promise fulfilled from all of your hard work, and I celebrate it with you right now, in anticipation of its arrival. 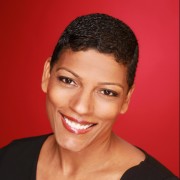 Janet D. Thomas is an engaging writer and captivating speaker whose words inspire and motivate, energizing transformation in those who experience her.